Last week I attended a talk by Tom Chatfied, on ‘How to Thrive in the Digital Age.’ It was part of an event by the School of Life. You should check it out – I’ve put the web address at the bottom – but for now, back to the point, this talk by Tom Chatfield.

One of Tom’s throwaway comments was, ‘I’m not saying email is evil – although I could make a pretty good case for it.”

And it’s got me thinking.

Email. Bloody email. Let me check my email. Email me. Did you get my email? The sender of my email wants a read receipt to prove I read it. This email has a red flag and has been deemed urgent. Your inbox is almost full.

Have you ever asked yourself: what does email want? This might sound like a silly question; email - after all  - is not a thinking sentient being with needs or wants? Or is it?

The conclusion I have reached is quite simple: EMAIL WANTS YOU TO SEND MORE EMAIL.

Reply. Copy everyone in. Forward. Blind copy. (naughty) Reply to the reply. Empty your inbox – only to fill up everyone else’s. Why phone? It takes five seconds to accomplish in an e-mail something that takes minutes on the phone. Shun conversing – who needs words like hello and goodbye or to have to pretend to have some semblance of interest in the person on the other end of the line?

Suggest a lunch date? I’ll need an email to confirm that invitation. Thank you very much.

I have 112 unanswered e-mail messages. Every time I start to reply to one a new e-mail icon bobs up and down and I’m compelled to check whether anything good or interesting has arrived. It hasn’t.

I replace conversation with smiley faces which express my emotions in dots and brackets. I accidentally send a smiley face to a colleague. I fail to respond to a red flag.

Sorry, but Rachel is offline and will not be responding to her emails. She has concluded they are evil.

I’m sure they also have an email address, but you’ll have to find that out for yourself.

If I told you that I’d sustained this on my first training run you wouldn’t believe me. You’d think I was making it up for a witty ‘silly old me’ blog post. The problem is that I’m not making it up.

I’ve done something to my foot. This does not sound too serious until you realise that the walking process relies heavily on really being able to put your full weight on your foot. If you do not do this, your knee develops an injury too.

By proxy I've hurt my knee.

And it was going so well. I ran 1.8 miles according to my Nike app. I say ‘ran’, I mean I survived. Ok, so I had to sit on a bench by the river for a couple of minutes after a mile, and yes I was somewhat thwarted by a stitch in my right side. And fine, I walked a bit. BUT, it was my first run and as I felt the bottom wobbling was under control, I had deemed it a success. 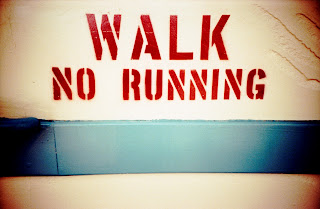 I should have known the next day I would be unable to walk, let alone run.

This is not my first exercise related injury. I have a weak ankle after a mountaineering sprain. A dodgy knee from a previous attempt to run places. And I’ve never quite recovered psychologically after falling off a cliff whilst abseiling.

I should probably just stay at home. Safe and sound.

For now I’ll hobble off to see someone who knows what’s wrong with it, and will eat cake and curse the day I ever considered self-improvement.
Posted by Rachel at 13:47 1 comment:

I’m an introvert in disguise. To those who know me this may come as a surprise. I like to chat, laugh loudly and appear, to all extents and purposes, to be a sociable being.


I need time to retreat, recuperate, restore the energies I am constantly depleting. I am always charging around, doing something – at work, with friends, and all the points in between.


And every now and then I crack. I flee. I swoon dramatically and announce in a manner not dissimilar from Greto Garbo, “I want to be alone.” I need to barricade myself in the house – every door, window, curtain shut against the outside world – and press myself into the farthest corner of the sofa. Me and my book. Perhaps some alone time with the Wire box-set.


I love social interaction. Really, I do. But for me it’s the quality, not the quantity of social interactions that really matters. And, however weird it seems to you extroverts out there,  I really do enjoy my own company. 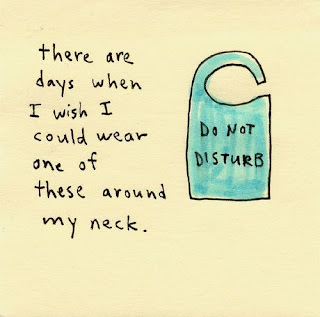 So enough of your jibber-jabber. I need rest,  recuperation and peace and blooming quiet.


Maybe I won’t close my doors on the world quite yet — but although I’d love to stay and chat, I’m afraid there’s a book at home that isn’t going to read itself.
Posted by Rachel at 05:35 No comments:

Get Rachel About Town in your inbox