Get that Friday Feeling

Today could not have come soon enough. ‘That Friday feeling’ being somewhat amplified by its also being the first pay day since, well, since a long time ago.
But ‘TFI Friday’ jokes aside, how many people are only happy at work on a Friday?
Every day, every second, life is rocketing past us at an alarming rate. I am concerned that it is going faster and faster. Remember the days when 6 summer weeks seemed like an eternity?
Perhaps life speeds up as we grow older to get us ready for take-off, if you know what I mean.
So why, if life is rocketing by, aren’t we doing all in our power to have lives that are successful, happy, fulfilled and packed with adventure?
A friend of mine - reasoned, rational and in a well-paid professional job - emailed me this week, subject line ‘Resign?’
She hated her situation, woke up at 4am worried sick and was desperately miserable. 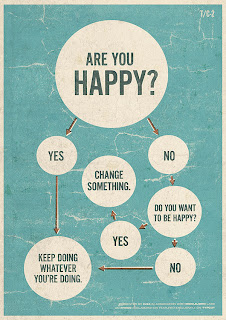 I sent her this picture. Are you happy?
I wish I’d remembered the story of a young guy who once worked as a runner in an advertising firm. One day he said to his manager that he was leaving. When asked why, he told them ‘I’m going to be a drummer.’
The manager said to him, ‘I didn’t know you played the drums.’ He replied, ‘I don’t, but I’m going to.’
A few years later that advertising runner played in a band with Eric Clapton, and it was called Cream. The man’s name was Ginger Baker.
He changed something and, most people would agree, got the Friday Feeling.
Posted by Rachel at 12:58 1 comment:

Nobody needs a flat-screen TV

My boss’s daughter recently dumped her boyfriend because ‘he didn’t know who Gandhi was.’  This struck me as a wholly reasonable reason.
Clearly she felt that if her fella had not even heard of this pivotal figure in philosophical and Indian history, then maybe he couldn’t even be ‘Mr right-now.’
As I bag up my possessions ready to list on eBay, I wonder if perhaps I hadn’t heard of him either.
Mahatma Gandhi could count the objects he owned on two hands. Sandals, a bowl, a plate, his glasses and a watch. I am sure I have all of these items in my handbag right now.  Plus many more I don’t care to consider. Lord knows what damage I am doing to my spine.
Listing my possessions would be an utterly untenable task.
I do not propose that we adopt Gandhi’s principle of ‘reducing ourselves to zero’ by giving up all expenditure and owning only the absolutely essential, but maybe we could do with ‘reducing ourselves just a bit?’
Once a year, ‘Buy Nothing Day’ challenges people to stop spending for 24 hours and think about what they buy and how it effects the environment and developing world. Unsurprisingly it hasn’t taken off.  But don’t we eventually have to ask, how much ‘stuff’ do we need?
In today’s society I believe that the exact term for all of this is ‘consumer desire’.  We desire a new pair of shoes, a new car, a better sofa and a flat-screen TV. In order to buy these things we need money. To get money we bind ourselves to an employer in order to continue to be paid.  If we don’t have money, we borrow the money, thus getting into debt.
I am currently trying to curb my spending, but I wonder if we all shouldn’t be trying to free ourselves from the shackles of shopping.
Try it. Try and spend nothing for an entire day. In the spirit of Money Saving Madam I will endeavour to spend nothing today, and in fact from this moment forth, unless the item is something that even Gandhi would have considered essential.
Oh crap; I’m going out for dinner tonight, is it OK to start not spending tomorrow?
Posted by Rachel at 03:27 No comments:

We have a runner

A friend of mine is a primary school teacher. Every now and then a small boy in her care takes the notion to escape. He glances around and decides he has had quite enough of literacy hour, story-time and number games. He wants out. So up he stands, and off he goes.
“We have a runner,” she cries.
This inspirational little lad got me thinking.
At what age do we decide that the proper thing to do is to stick things out? Suck them up? Plainly get on with it?
I rather like Paul Arden’s books. Paul Arden was the executive creative director of one of the most creative agencies in the world. He was inspirational. He commands us to,


"Simply change your life.
The world is what you think of it.
So think of it differently and your life will change."
Paul Arden
We all want things out of life. I want shelves full of books, a shaggy dog, and to live near the beach. We all want things, but how many of us will go out and make the sacrifices necessary to get there? How many of us are brave enough to run?
There is a point on a runway during takeoff that a plane reaches a certain speed. Once it passes this speed it has reached the point of no return. The point where the take off cannot be aborted. The plane has to take off. Or crash.

We wait for the right time without ever knowing how to define ‘right’. The simple truth is that there is never a right time. The stars don’t all suddenly line up in one neat little row to show us the way.

It’s called a leap of faith for a good reason. It’s a risk. And the outcome is far from certain. And that is why we tend to put off these life-changing decisions.

So if we want to be good, if we look around and are quite fed up of sticking it out, well maybe the answer is to create our own false ‘maximum speed’ markers in the runway.

Set it. Stick to it. And then say ‘what the hell’ and run like mad.

I’ve cancelled my charity direct debits.
I did it anonymously online and I feel bloody awful about it.
My guilt is compounded by the fact that I went out for lunch on Saturday and spent Action for Children’s tenner on a cheese sandwich and sponge. (I know, dreadful. Is it any consolation that I spent Saturday night in with a DVD purchased from Salvation Army? No, I thought not.)
All around me are reminders that I am now trying to hoard it for myself. A man sits outside my office, propped next to the pay and display machine. I see him every morning and evening sitting with an outstretched cup and a hopeful smile.
He makes me feel dreadful. Do I pass in front of him, rushing by without making eye contact? Trying hard to seem rushed like most other city dwellers? I know he’ll be looking at me, smiling wide, perhaps sensing my discomfort.
Or should I walk on the other side? I can’t. The similarity to the Parable of the Good Samaritan is too much to stomach.
So many places in our cities are marked out in this way. Like so many others, he hovers near the same spot, the same times each day. Only the truely heartless could ignore him, and then only for so long.
So can I spend a year as a ‘truely heartless’? Even if I can justify the canceling of monthly expenditure, (which I probably can’t) what about those who just need me to ‘spare a little change?’
I shall dole out the change with genuine good cheer.  And though I am sure I will still feel like a stooge, at least in the short term I can make a token difference in someone's life. They need it more than me, and besides, I’d only blow it on sponge.
Posted by Rachel at 05:12 No comments:

Weddings are big business. We’ve all heard that the word ‘wedding’ in front of photographer or caterer will automatically double the price. But who gives a thought to the innocent bystanders in this whirl of romance, tiered cakes and shelling out?
What about the guests?
Perhaps my engaged friends should look away now.
Nothing can put pay to a savings plan like a spurt of weddings. And I should know.
In what is becoming known as ‘Wedding Gate’, I am 13 days into not spending and am haemorrhaging money left right and centre. It is certainly unlucky for some.
You may be shocked to discover that some unemployed PhD student somewhere has done research into this very issue. And how enlightening it is. It turns out that some 6% of us have gone into debt in order to attend a wedding.
This might seem ridiculous, but even when the celebrations are held locally, the price of attendance can be high, at an average of £386. Stag and hen parties account for the largest chunk of this sum, at £130, with a wedding gift costing £70, clothes £64, travel £49, accommodation £48 and drinks £26.

Personally I feel these numbers are generously low. £26 on drinks? At a wedding bar? Clearly they’re on the lemonade.

I am glad to report that none of my ‘Bride’s to be’ have adopted the trend for overseas ceremonies or hen parties. It really would ruin the occasion to be standing on a tropical beach simmering with resentment.

Weddings are a time to celebrate. I am desperately excited to see some of my oldest and dearest friends get hitched. But if anyone else is considering setting a date, if you could wait until 2012 my bank manager would be delighted.
Posted by Rachel at 06:48 1 comment:

Oh my goodness, I’m exhausted.
Since 2011 began, not only have I experienced Catholic levels of guilt for every penny I have spent, (food – surely non essential, a train ticket to visit my parents – exorbitantly expensive, I’ll just go next year) but I’ve also been following all of the helpful recommendations of newspapers, adverts and retailers. After all they’ve only got what’s best for me at heart.
I was indeed ‘naughty’ over the festive season, with one too many wines, mince pies and after eights. I am thus feeling the appropriate amount of advertising induced guilt and considering the veritable benefits of overpriced gym membership, stocking up on ‘slimming’ special K and feeling suitably motivated to blend a batch of cabbage soup.
Of course, it’s all wasted on me at the moment. I simply can’t afford to keep up with the Jones’.
I would have once have seen and envied the bodies of Hollywood stars, but I’ve had to cancel the DVD rental.
There was a time when I could have pored over ‘How to make 2011 your best year yet’ or ‘The new diet that caused Cheryl Cole to waste away’, but I’ve cancelled the magazine subscription
2011 is the year that I can’t afford to take any of this bogus advice, and all the more adequate I feel for it.
Posted by Rachel at 09:06 No comments:

Get Rachel About Town in your inbox